Gurugram is located in the National Capital region near New Delhi in Haryana state. It is located about 32 km to the south-west of New Delhi. Due to its rapid urbanization and industrialization, there has been a spurt in job opportunities and high lifestyle which has led to a massive migration into this “Millennium city”. Due to high number of companies here, commutation has always been a prime concern for this city. 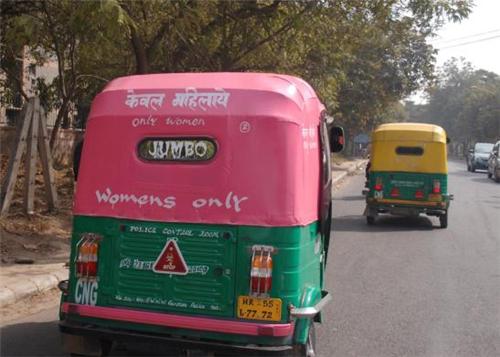 Gurugram is connected to Delhi by National Highway 8 which is the major highway in Gurugram running from Delhi to Mumbai. While the 27.7 km Delhi-Gurugram border-Kherki Dhaula stretch has been developed as an expressway, the rest is expanded to six lanes. Means of commutation include government and private buses, metro and shared auto rickshaws.

There are almost 18,000 auto rickshaws plying in Gurugram city. Auto rickshaws form a major chunk of commutation in Gurugram. It is the second popular choice only after Metro in Gurugram. But due to bad conditions of roads and lack of proper monitoring, hiring an auto is a costly affair in Gurugram. Unlike their counterpart in most of the places in Delhi where running on meter is mandatory, Gurugram auto rickshaws don’t have the mandate to do so. Autos in Gurugram charge exorbitant prices at their will.

Gurugram auto rickshaw fare is difficult to generalize as the drivers often charge at will. But the fares mentioned here would give you a fair idea.
If you are travelling individually in an auto, there is no booking fee.

Waiting charges is Rs. 30 per hour, subject to a minimum of 15 minutes stay.

Additionally luggage charges are there at Rs. 7.50 for extra luggage, however the driver won’t charge for light luggage like a shopping bag or a small suitcase.

How these radio auto works

Customer calls the call center and provides information about pickup time, venue, contact details and destination. Autos in vicinity of passenger are contacted to check their availability via GPS and phone.  Once request is accepted by any of the auto rickshaw, customer is informed about the details of auto rickshaw (vehicle no, driver contact etc.) coming to service them.  Simultaneously, contact details and pickup time for the booking are communicated to driver via SMS.

Some of the radio auto are below: 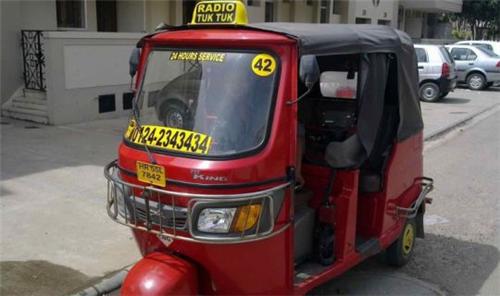 Radio Tuk Tuk (Red Auto on call)
Radio Tuk Tuk is an auto on call service launched in 2010, it was the first of its kind in Gurugram and revolutionized the private auto service in Gurugram. Radio tuks tuks are fitted with GPS, panic button, mobile charger and auto fire cut-off system. The vehicles are TVS manufactured and CNG fitted. They have over 300 hi-tech fleet of autos. 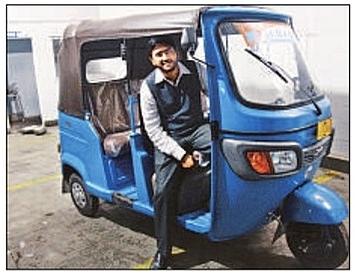 Blue Auto on Call (Autocall)
Blue Auto call was also started by private players in 2011. Blue Autos are fitted with first aid kit, fire extinguisher, immobilizer, GPS, electronic meter, emergency button, and microphone. The vehicles are TVS manufactured and CNG fitted. At present the operator has launched 40 such autos and plans to increase the number in near future.

Fare: Rs 50 for first 3km and Rs 8 for each subsequent kilometer 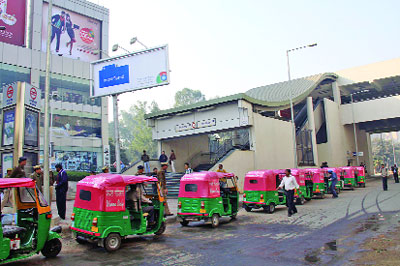 Availability: at all the five metro stations of Gurugram operated by DMRC.