Many a times, it happens that people get stressed and tired of their overworked and monotonous life and this mainly happens in industrial cities like Gurugram. Recently, Gurugram has emerged and set itself up as an industrial city that has a multitude of people working in some of the branded companies of the world having their corporate offices in Gurugram. The city of Gurugram is extraordinarily developed and it is still in the way of making some of the most advanced technologies at present. It is only because of the development of the city in terms of industries that the employment scale of the city has also increased resulting in the rise of population of the city. The rise in population has mainly taken place because of a large number of people coming to Gurugram in search of a livelihood. Educated people are getting jobs in the multinational companies located in Gurugram while the uneducated people are also getting jobs at lower positions in the same companies. The large scale development that has taken place in Gurugram is mainly the hard earned effort of the people and it is always important for people to have some enjoyment and some fun out of this hectic schedule. Keeping these factors in mind, the Fun 'n' Food Village Gurugram was set up in 1993.

The fun 'n' food village Gurugram was founded in 1993 and ex-President of India, Giani Zail Singh inaugurated it. This is an amusement park that is situated on the Old Delhi-Gurugram Highway that is a few kilometers away from international airport. The fun 'n' food village Gurugram has its setting amidst a flourishing forest and the view of this park is complete with the scenic views that are found all around. There is a calm and a serene atmosphere created by the park that has the ability to relax the tired muscles of an individual. The serenity and the calmness of the park also soothes the senses and the nerves of an individual.

Objective behind the Establishment

The fun 'n' food village Gurugram is an amusement park for kids, children and even for the elders. It is inclusive of some of the most amazing joy rides and even a water park. The park is said to be the very best retreat because of its fertile greenery, panoramic views and the tranquil and serene atmosphere that it possesses. This park situated in Gurugram is a place that is not only for fun and enjoyment but at the same time it also showcases the traditions of the past with an assimilation of futuristic and modern recreations. The main motive behind the establishment of the fun 'n' food village Gurugram was to promote the traditional crafts and the art found in India along with the rich culture and tradition of India. The joy rides are there to provide fun and enjoyment but at the same time the park also features creations and performances from the craftsmen and artisans at work. The park also consists of some of the top set health clubs that possess facilities such as steam bath, sauna, Jacuzzis and herbal massage. Souvenirs can also be bought from the warehouses that are located within the park.

Attractions in Fun and Food Village

Of all the major and beautiful attractions found at the fun 'n' food village Gurugram, its water park popular as village club is considered to be the most beloved and famous feature and this goes especially for the children. The water park located in fun 'n' food village Gurugram is open for all ages. Wave pool is the most famous attraction of the water park which is enjoyed thoroughly. The wave pool is one of the largest wave pools in comparison to the other wave pools found in other water parks of the country. Artificial waves are the main attraction of the wave pool and these are generally created. It totally depends on ones choice whether he would like to sit close to the shore and enjoy the lapping waves or go near to the strong waves in order to feel the strong currents of the water.

Other Attractions - Water-Slides and Rides

The water park that is located in the fun 'n' food village Gurugram also consists of a water slide that is quite amazing and it has also got the distinction of being one of the longest water slides throughout the country. The lazy river is also a famous water channel that is 400 ft long and it is meant for the visitors to float along and get some relaxation. There are 22 waterslides in the park and 20 rides along with the rain dance that is also considered to be a major attraction of the park. This park is truly a family place that can be enjoyed thoroughly and can be opted as an ideal place for a day that is completely fun-filled.

The Fun 'n' Food Village Gurugram is considered to be the perfect place that can cheer up a family because of the fun-filled activities that it consists of and also because of the joy rides that are available at the park. Apart from the joy rides and the water games and activities, the park also consists of a market that indulges in the sale of crafts work that are quite traditional and unique. Cultural activities such as folk dramas and dances from all the different corners of India are also conducted at this village. One of the most attractive features of the park is that it consists of the largest indoor snow park that is spread over 2500 sq.m land. The amusement rides, rain dance, water slides and the water play for the kids are some of the highlights of this park. 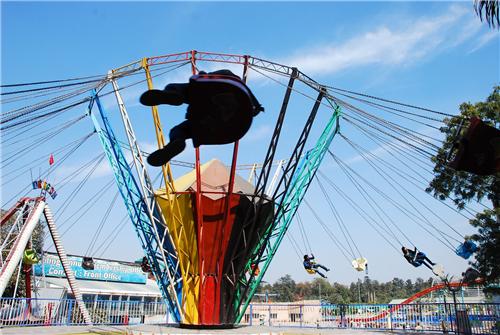 From the 21 rides that are found available in the amusement park located within the fun 'n' food village Gurugram, here are some of the most famous funs and rides that one can look forward to:

The water park located in the fun 'n' food village Gurugram is an Indo-US project and is a major attraction during the winters. There are a number of rides and fun activities that are available at the water park and some of them have been enumerated below: