"Win a medallion and get a job’
The above phrase has literally changed lives of many sports personalities as it is the motto that welcomes the people who are visiting the far-famed Nehru Stadium located in the millennium city of Gurugram. To get straight to the point, Gurugram is a city that is fond of various sports and offers a good number of options for the same. 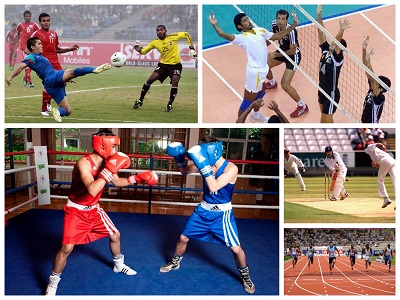 The role of Government of Haryana in promoting sports in the city is simply commendable as the state government has actuated a lot of sports friendly policies and undertook development operations of sports facilities. Furthermore, the state government never misses an opportunity to accolade and present cash prizes for champions of national games.

Earlier, sports were nothing more than a time pass but nowadays the country is witnessing more and more people who have the right set of mind and who are ready to take sports as their career. The state and central governments are encouraging sports in the country at every possible instance and today even a little success in sports at the national level gives the eligibility for the sports people to earn a government job.

Though the city of Gurugram loves different kinds of sports and games, Boxing, Field Hockey, Volleyball and Gymnastics are the best bets. All the sports and games are hosted at the famous Nehru stadium which is located very close to the bus stand in the Civil lines.


Various Plans and Activities Undertaken by the Gurugram Sports Department

Veteran sports personalities from the northern state of Haryana are eligible to receive pension based on their achievements in sports.

Budding Hockey, Gymnastic, Athletics and Volley ball players are encouraged to take up the sports as their career and given an opportunity to stay in the hostel for free and necessary sports trainings are offered.

Sports Wing for Judo
Address: GSSS Sec-4/7, Gurugram
Ajit stadium, Dhanwapur, Gurugram
Compensation: Rs. 1500 for U-14 and Rs. 2000 for U-19 are compensated for players training.

Students who come in the first three positions in all acknowledged National and State level contests, National School Games and State School Games in assorted sports will receive scholarship starting from Rs. 1,200 to Rs. 3,000 for each year.